In today’s world, neurological disorders constitute one of the greatest risks to human health, comprising a variety of issues such as cognitive decline, poor motor functions, depression, stress, etc. Older population (>SO years) are very often more prane to these complications, though recent studies revealed that younger individuals are also getting affected significantly. More than 47.5 million people have been characterized with dementia worldwide and about 7.7 million new cases are adding to the dementia pool every year. It is estimated that approximately 8.4 million Americans over 65 years will be characterized with Alzheimer’s Disease (AD) or other forms of dementia by 2030. Almost 70% of all Dementia cases in the U.S. are reported to be primarily caused by AD, accounting for an annual expense of about $170 billion, out of the total $243 billion due to dementia cases.

Due to the safety concerns (side effects) around the medical drugs, the herbal medicines are emerging as the safe viable options for brain health, especially for cognitive improvement and management of neurodegeneration conditions such as AD and dementia. Though research on various herbals is progressing, turmeric (Curcuma Longa) and its active principle curcumin has already gained global recognition as a safe cognitive support ingredient acting through a multitargeted mechanism of action.

Problems with the bioavailability of curcumin

But, there are hurdles of poor solubility, rapid metabolism to inactive & impermeable metabolites and poor BBB-permeability to mediate brain health potentia! to humans. The absorption and organ tissue distribution of any substance’s bioactive form are critical for functional/therapeutic efficacy at the target site. In the case of curcumin, a large number of n-vitro studies have revealed intriguing pharmacodynamics as a neuroprotective agent, specifically confirming the modulation of genes, proteins, transcription factors, and neurotransmitters at the mitochondria! level in support of curcumin’s possible positive influence on various brain health functions, such as neurodegenerative conditions, traumatic brain injury and neuroinflammation.

However, the true challenge in translating its therapeutic potentia! to the clinic is the development of ‘formula tions’ capable of delivering the bioactive form of curcuminoids to brain tissues at significant concentrations . Native form of curcumin (free form) is Blood-Brain-Barrier (BBB) permeable. But, once it has undergone biotransformation or metabolized into glucuronides and sulfates (conjugated metabolites), it cannot enter the brain since the conjugated metabolites are bulky water soluble molecules with no BBB-permeability, rather undergo fast renal clearance. Consumption of high dosage of unformulated curcumin with 95% purity has been shown to deliver some unconjugated free forms (less than 10 ng/g level) to brain when analyzed by sensitive tandem mass spectrometric tools. As a result, any curcumin formulation, including unformulated curcumin 95%, can provide some degree of neuroprotection. But, these effects are quiet marginal and requires high dosage. For functional benefits, formulations capable of delivering significantly high levels of ‘free’ curcuminoids is required for brain health.

Unlock the power of your brain, naturally

In other words, brain pharmacokinetics can be considered as the ‘litmus test’ for free curcumin bioavailability of a formulation and its cognitive efficacy. Here comes the significance of CurQfen®-curcumin since it is the only 100% natural, clean label, food-grade, organie certified bioavailable form of curcumin, which is demonstrated for its BBB-permeability in both animals and humans. CurQfen® has established its brain tissue distribution, preferential distribution of curcumin in the hippocampus of the brain by unique brain regional pharmacokinetic studies.

CurQfen®, the new generation curcumin for brain health which is a green formulation of curcumin and de-bitterised fenugreek fiber as self-emulsifying hydrogel scaffold, is capable of delivering high level of BBB-permeable ‘free curcumin’ even at a low dosage of 250mg single dose (Kumar et al., 2016).

“CurQfen® has been on sale for many years, we notice more and more interest in this product and more and more sales on European markets. It is the only curcumin with proven blood-brain barrier permeability, pharmacokinetics and regional distribution in the brain. This is confirmed by numerous studies and tests” – Patrycja Łomnicka, Product Manager Cortex Chemicals.

The advantages of CurQfen® are:

CurQfen®, winner Nutraingredients Asia Awards 2021 in category „Ingridient of the year – cognitive function”. It is the only 100% natural curcumin with a pure composition and high bioavailability supporting the cognitive functions of the brain. 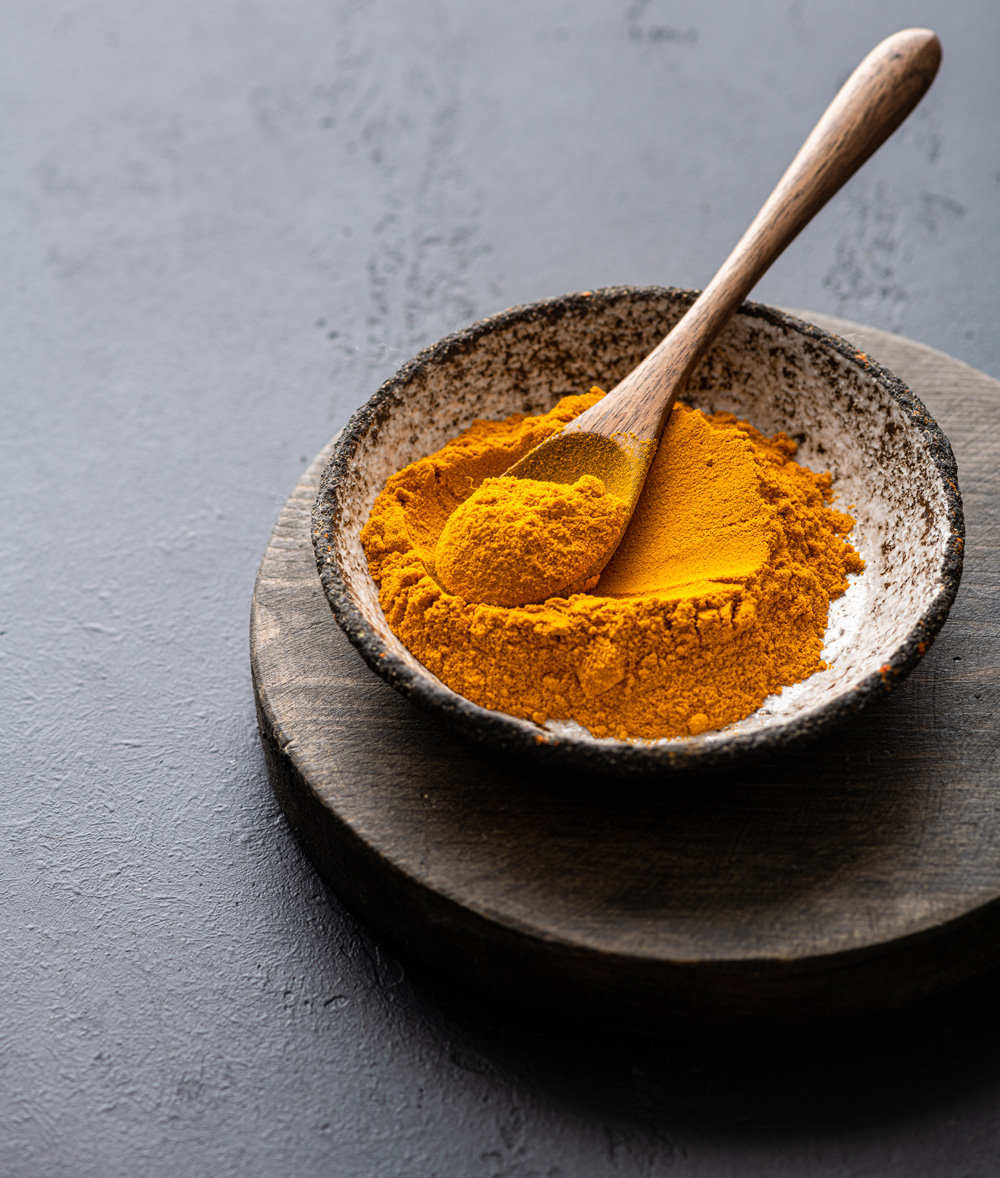 CurQfen® has shown to deposit free curcuminoids, (including curcumin, DMC & BDMC) at >100 ng/g in brain tissues, with extended elimination half-life of 4 hours. Standard unformulated curcumin, on the other hand, detected only 1.4 ± 0.8 ng/g of curcumin in the brain tissues, indicating the improved BBB permeability. The depositions at the other organ tissues at (ng/g), heart (391.7 ± 102.5), liver (445.52 ± 83), kidney (240.1 ±47.2), and spleen (229.72 ± 42.2) also conforms the cell uptake of bioactive curcuminoids, which is an essential feature for extending the efficacy of any drugs (Krishnakumar et al., 2015). CurQfen® has proved its enhanced neuroprotective effects and enhanced anti-neuroinflammatory effects with significant behavioural changes and modulation of neurotransmitters, and brain mitochondrial enzymes in various animal models (Sunny et al., 2019; Sindhu et al., 2018).

CurQfen®’s improved BBB permeability and cellular absorption has major implications for brain health. CurQfen® has been shown to have substantial in vivo stability and permeability in order to resolve metabolic turnover and offer substantially high levels of free curcuminoids for BBB permeability in studies. As shown by peer-reviewed scientific publications with high impact factors in non-open access journals of academic interest, CurQfen® has the inherent potentia! to deliver the <free’ bioactive curcuminoids into the target sites, including the brain. 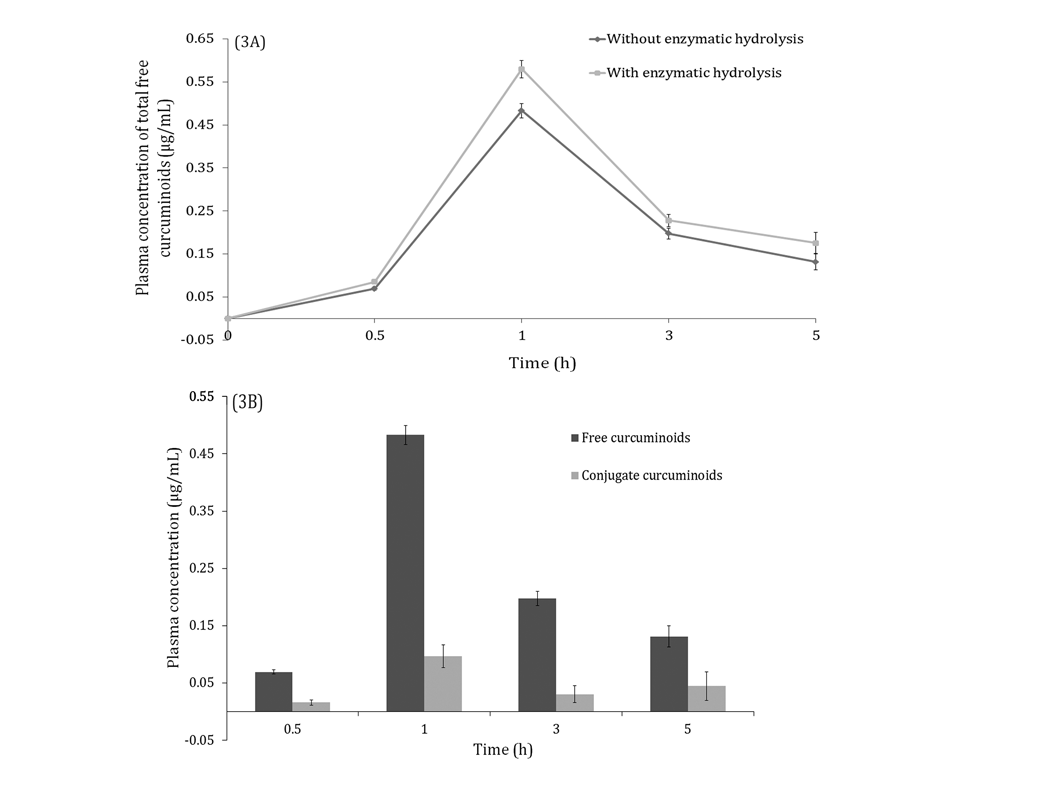 Most recently published clinical trial on Nutritional Neuroscience, 2021 revealed the brain regional pharmacokinetics following the orał consumption of CurQ fen ® and its effect on cognitive health. The bioavailable curcumin market is flooded with different formulation claiming as brain curcumin. However, a systematic information on BBB permeability and brain tissue distribution has not been reported so far.
CGM was given to animals in single dose (1oo mg curcuminoids/kg b. wt.) and repeated dose (100 mg curcuminoids/kg b. wt. for 28 days) and the concentration of total curcuminoids at various parts of brain was evaluated at different time points using Ultra-performance liquid chromatography / electrospray ionization triple quadruple tandem mass spectroscopy (UPLC-ESIMS/MS) system. The results were surprising. CurQfen® was able to distribute significant amount free curcuminoids in brain especially in the hippocampus at both single and repeated dose administration. 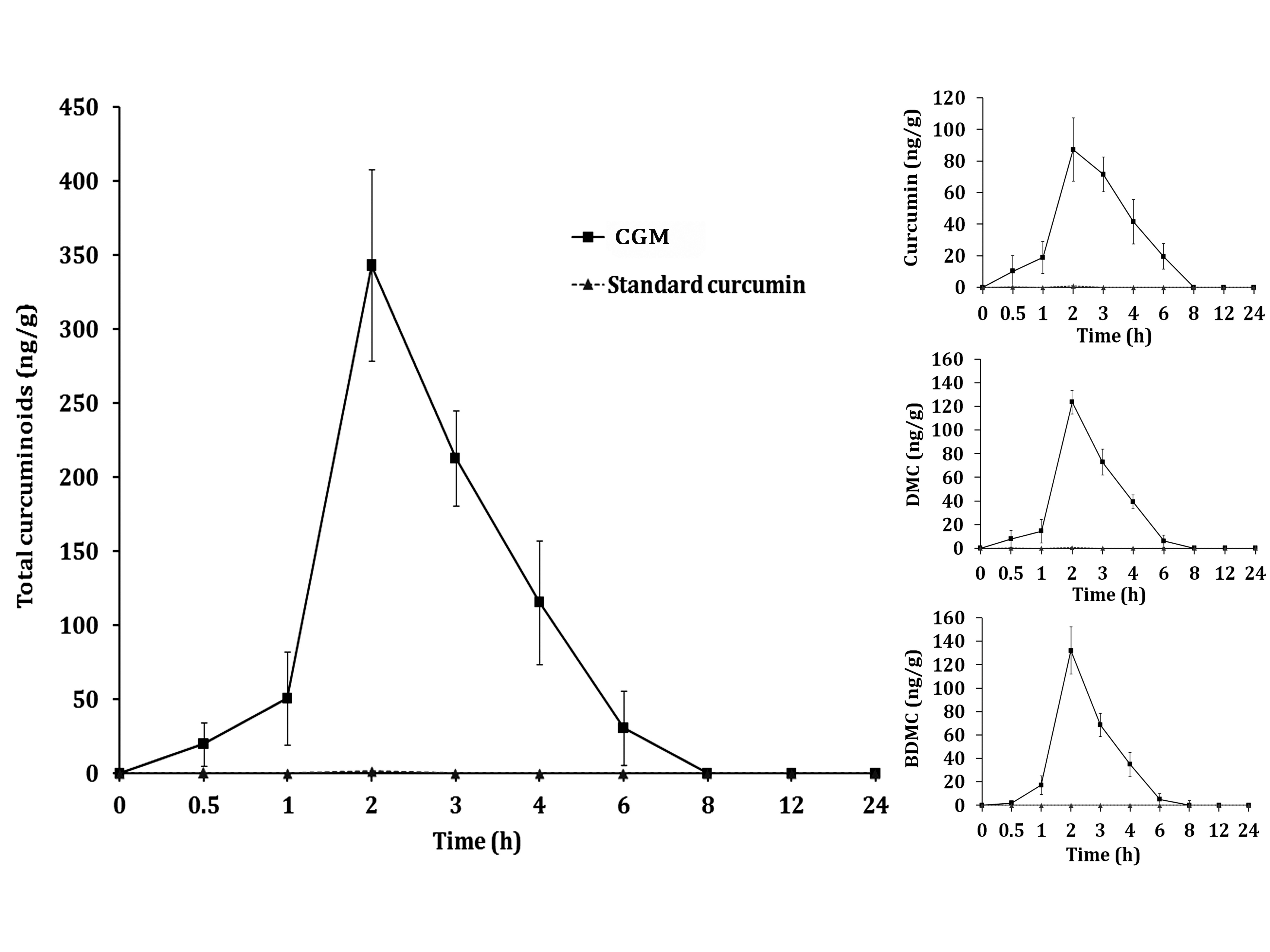 Further, the effect of brain delivery of curcuminoids was also studied on behavioural changes with a set of behavioural studies on vehicle control. In RAM test, CurQfen® treated animals had shown significant reduction in working memory error and reference memory error as compared to unformulated curcumin treated animals, which clearly shows the improvement on cognitive function upon CurQfen® administration. The reason for a better behavioural changes may be due to the distribution of free curcuminoids in various regions of brain including hippocampus where the maximum curcumin content was observed.

In addition to this, CurQfen® was investigated by Electroencephalography imaging (EEG) and showed for the first time that CurQfen ®-curcumin can modulate brain waves in human volunteers as a proof of its BBB -permeab ility and brain penetration as compared to Unformulated curcumin which failed to make significant changes as observed with placebo (Nutritional Neuroscience, 2020 ). “We were surprised to see the results of the 30-day clinical trial when the software-assisted analysis of the Electroencephalogram (EEG) data was completed, since this is the very first time the ejfect of curcumin on brain waves was investigated as a proof of its Blood-Brain-Barrier (BBB)-permeability and brain bioavailability”; said the researchers 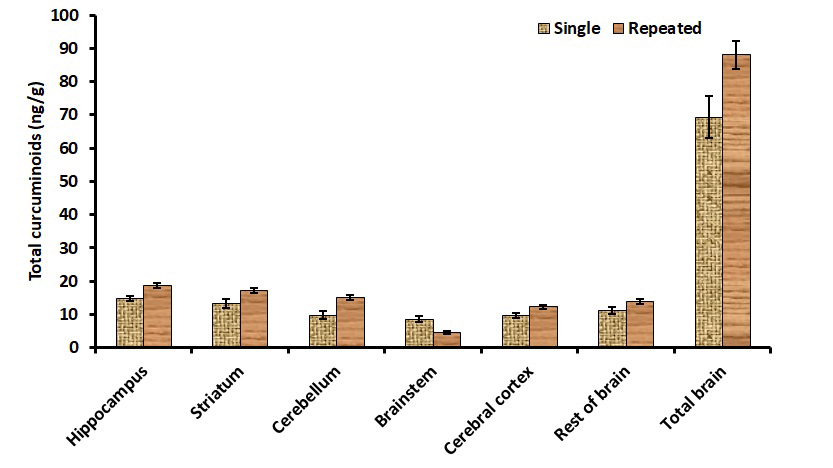 FIg. Graphical representation of changes in brain waves before and after administration of CurQfen®

What makes CurQfen® successful? The only answer is the science which backs CurQfen ®. CurQfen® is designed on the principles of self-emulsifying nano drug delivery, using the concept of reversible hydrogels based on a 100% natura! & food grade platform technology, known as FENUMAT™; backed by three international patents. FENUMAT ™ is based on the soluble dietary fibre (galactomannans) from fenugreek (Proprietary composition of de-bitterised galactomannans without containing any phytochemicals such as saponins in fenugreek seeds) and a water-based process. Fenugreek galactomannans have a unique and peculiar chemical structure that makes it an ideał medium for loading both oils and hydrophobic molecules under optimal conditions. The water-based process & absence of organie solvents & synthetic excipients distinguishes FENUMAT ™ as the first commercially viable “green approach in phytonutrients delivery:’ In other words, our R&D succeeded in tuning the fenugreek galactomannan network as an amphiphilic hydrogel network with optimum hydrophobic – hydrophilic balance for the accommodation of lipophilic substances

A recent RCT published in the Journal of Functional Foods reported the co-delivery of two poorly bioavailable lipophilic phytonutrients, namely curcuminoids, and 3-Acetyl -11-keto- -boswellic acid (AKBA) at a single dose of 250 mg. Curcuminoids and boswellic acids have been shown to work in a synergie manner to improve joint health and relieve musculoskeletal pain. Co-delivery through the FENUMAT™ platform reportedly caused enhanced absorption of the free forms of both curcuminoids and AKBA with 24.8-fold and 6.9-fold higher bioavailability than their unformulated counterparts. The combination has shown improved efficacy in joint health and musculoskeletal pain than curcumin/boswellic acid physical mixtures. A number of combinations have optimized for condition specific applications. For more details and combine with different ingredients such as oils, please contact us.

FENUMAT™ is now extending to various bioactives such as Resveratrol and Boswellic acids, Vitamin C etc.

Fig. Spectogram and time-course before and after administration of CurQfen®

The effect of CurQfen® on the health of joints, heart and liver has been clinically proven in over 20 studies. Its huge impact on supporting the cognitive processes of the brain is also confirmed by behavioral studies. CurQfen® is on the GRAS list, which means that its safety for human health has been confirmed. Thanks to the use of 100% natural curcominoids, without the addition of synthetic emulsifiers and other auxiliary substances, customers receive an organic product, delivered via a probiotic.

Cortex Chemicals is the exclusive distributor of Akay’s CurQfen®. The product can be adapted to a variety of applications. Contact us to order the product.

Thank you for sending the application.
Our specialist will contact you as soon as possible.

Thank you for sending the message.
Our specialist will contact you as soon as possible.

Thank you for signing up for newsletter Cortex Chemicals Sp. z o.o.